National Rail Museum situated in New Delhi which focuses on the rail heritage of India it opened on the 1 February 1977. It is located in over 10 acres (40,000 m2) of land with both indoor and outdoor exhibits. A toy train offers rides around that site on regular days.Museum remains open from 10.00 am to 5.00 pm (Last entry 4.30 pm, last 1:8 toy train and joy train round at 4:45pm) Tuesday to Sunday. Museum remains closed on every Monday and National Holidays. Apart from vast outdoor and state of the art Indoor Gallery. It is now equipped with 1:8 scale train, Diesel simulator, Steam Simulator, Coach Simulator and many more.

Though initially thought of in 1962, the idea for opening of Transport Museum took a concrete shape in 1970 under the advise of Mr.Michael Graham Satow a rail enthusiast. Shri V.V Giri, the then President of India, laid the foundation stone for the Rail Transport Museum (R.T.M) at its present site in Chanakyapuri, New Delhi, on October 7, 1971.

The Rail Transport Museum was planned as a part of a larger complex covering the history of Railways, Roadways, Airways and Water-ways in India, which later on developed into a full-fledged National Rail Museum in the year 1995.

The first of its kind in the country, The National Rail Museum covers a land area of over 11 acres and the indoor gallery comprises an elegantly designed octagonal building, housing six display galleries, and a large open display area laid out to simulate the atmosphere of a railway yard.

National Rail Museum is always open through out the year, Except on Monday.

Take time to enjoy the outstanding unique Toy Train. Blow the whistle, toot the horn and turn the lights ON and OFF as you go around the track. Also be sure to check out the miniature structures, scenery, vehicles etc that populates this Museum. 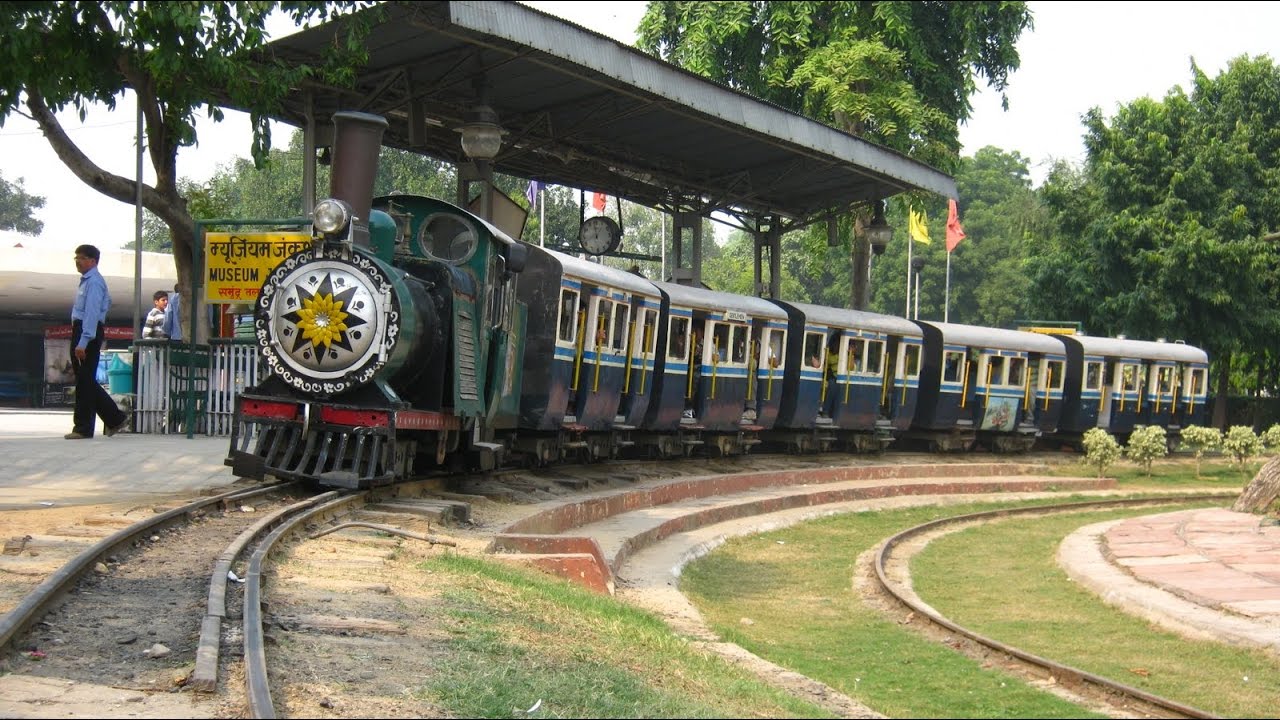 The 1:8 scale train set is nowhere near as massive as the real “BHEEM” and 4-4-0 steam from which it is based on. But you can get on it. The train is designed to haul adults and children of all ages around the layout and each car can accommodate a combination of adults and children. It travels at a leisurely pace which provides time to view all the interesting outdoor exhibits, waterfall, bridges, tunnels and artifacts around the NRM.

This is largest working railway model layout of India. Welcome to miniature India at the National Rail Museum – It is one of the most popular attractions for people of all ages. It will bring back fond memories of yester years and will allow you to pip into the future. Miniature India depicts different kinds of landscape models of 1:87 scale. The working models, passenger trains, goods train, bullet trains, mono rail, metro trains, and even steam trains in the hilly region will enthrall one and all. You can also watch a cricket match at the model Wankhede Stadium.

India’s largest Rail Garden. Welcome to Rail Garden at the National Rail Museum – One of the most popular attractions for people of all ages. Your visit will be memorable and it will bring back fond memories of yester years and will allow you to pip into the future. Rail Garden will depict different kinds of models 1:22.5 scale working models of passenger trains, goods train, waterfalls, ropeways and even steam trains in the hilly region will enthrall one and all. Watch trains move around the heritage structures such as V.T, Charbagh, Madras Central, Guna, Delhi Junction.

Indoor Gallery of NRM gives a nostalgic feeling by telling the remarkable stories of the Great Indian Railways. You will enjoy your day at Indoor Gallery as we take you on a journey starting from the earlier modes of transportation in India right through till date and further into the future. The Indian Railways which now employs 1.33 Million and is runnning over 1,15,000 km has a rich heritage of more than 160 years. The modern Indoor Gallery is a unique combination of historical collection, train models, interactive games, modern simulators, and cutting edge communication. The Museum is divided into the six sections to cover all major aspects of Indian Railways.

It is aimed to inspire curiosity, encourage thinking and promote social issues related to Railways. This is definitely something not to miss out when you visit New Delhi.

The locomotives of India presently consist of electric and diesel locomotives. Steam locomotives are no longer used in India, except in heritage trains. A locomotive is also called loco or engine. The Bengal Sappers of the Indian Army were the first to run a steam locomotive in India. The steam locomotive named Thomason ran with two wagons for carrying earth from Roorkee to Piran Kaliyar in 1851, two years before the first passenger train ran from Bombay to Thane in 1853. 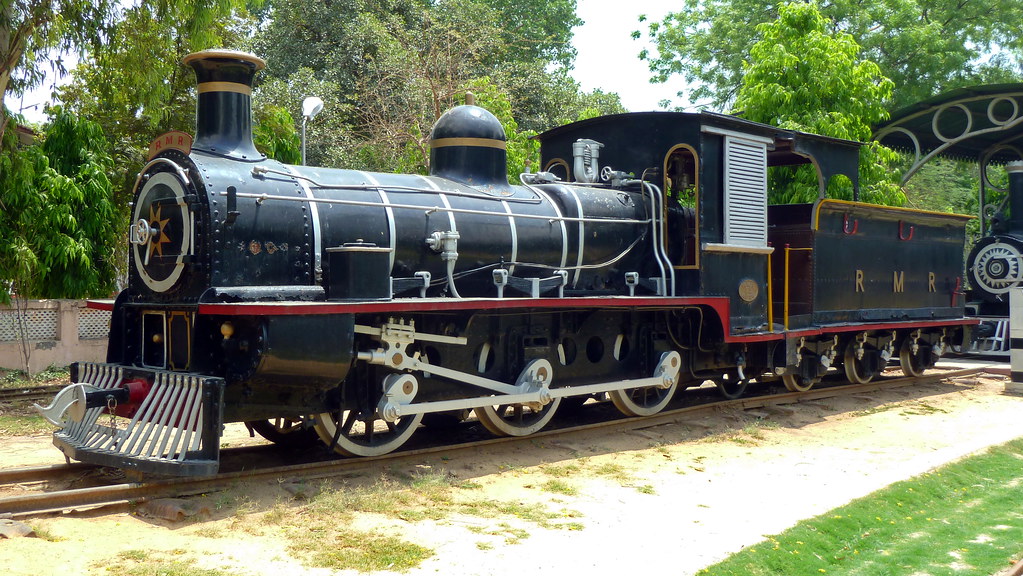 F-734 has the distincton of being the first locomotive to be built in India. Manufactured in 1895 by the Ajmer Workshop of North Western Railway, it set the ball rolling for future locomotive manufacture in the country. Prior to it, locomotives were assembled at Jamalpur Workshops from spare parts supplied by the original manufacturers. The 38.25 ton 0.6.0 wheel arrangement locomotive is equipped with 'Stephenson valve gear' and inside connecting rods. It was used on the Rajputana Malwa Railway (also known as Rajputana State Railway before 1882). It ran from Delhi to Indore and up to Ahmedabad, and later on B.B. & C.I. Railway for mixed traffic (passenger and goods). Its manufacturing cost was Rs. 15,369/-.

This 20 ton, 04-2 wheel arrangement locomotive was originally manufactured by M/s Dubs and Company, Glasgow, as a tender locomotive and was introduced by the Rajputana Railway in 1885, after which it was transferred to the Jodhpur Railway. It was later modified by the Jodhpur workshops in 1912 to a saddle tank arrangement with increased height coal bunkers. Initially used for mixed traffic upto 1912, it was later utilized for shunting service till its phasing out in 1952. Equipped with "Stephenson Valve" gear its maker's No. was 1175, later renumbered as ISR-E-107 and finally after 1879, it was changed to E-207.

This tiny locomotive was imported from John Fowler & Co., Leeds, and was originally used to work light passenger trains on the areas of Gondal and Saurashtra state. Later it was used as a shunting locomotive in Ajmer Workshops of the Western Railway. Diesel traction got off to a very early start in the arid regions of Saurashtra in Gujarat, on account of a perennial water shortage, and the subsequent non-availability of sufficient water supplies for steam locomotives. This diminutive diesel engine was one of the first to run in that area; indeed, one of the first diesels to run on Indian soil. It got retired in 1970.It has a 4 stroke 4 cylinder 150 BHP diesel engine with mechanical transmission. Its maker number was 4200031, Saurashtra Railway No. 203, Western Railway No. 1004. It was imported at the cost of Rs. 5,936/-.

Originally built for the karachi port trust by the british firm of dick kerr &co in 1910 this beautiful 2' 6" locomotive with an oversize chimney also worked vt the marala timber depot from 1917-1922 after which it was finally brought to the creosating plant at dilwan on the Northern Railway.

This engine is called fireless locomotive as it has no boiler. Instead of it there is a pressure vessel mounted on the underframe. The steam was collected in the pressure vessel from a static boiler. This engine was used for shunting in areas of inflammable material such as oil, jute etc. This 35 ton broad-gauge (5'6") locomotive with 0-4-0 wheel arrangement was manufactured by Henschell, Germany in 1953. Due to its limited capacity of the steam accumulator, this locomotive had max. restricted speed of 18.5mph and was limited to short area movements. This locomotive, with makers'number 25630, was used in Sindhri Fertilzers Co.

This is a typical example of BESA (British Engineering Standards Association) design. This engine was built as HG class but in 1929 altered to superheater design and changed to HGC class. It was manufactured at Vulcan Foundry, United Kingdom in 1909. This 73 ton, 2-8-0 wheel arrangement type broad-gauge locomotive was used as heavy freight locomotive earlier on North western Railway, later on East Indian Railway and lastly on Northern Railway. Equipped with two 22"x26" outside cylinders, 'Walschaerts' valve gear and two 'Rosspop' type safety valve this locomotive maker number was 2461 and Indian Railway number was 1598.

These locomotives were-very popular on the light railways of India for mixed traffic. This particular locomotive served at 2'6" narrow-gauge of Bankura Damodar River light railway of West Bengal. It was imported from Sentinel Waggon Works, Shrewsbury, UK in 1930. It weighed 16.51 ton. It has four chain driven wheelS out of total of 6 wheels. It is fitted with 'Wakefield's Eureka' type lubricator, two small 'Sentinel' type injectors, & 'Sentinel-mushroom' type valve gear. Its maker number was 8135 later Changed to Indian Railway No. BUR-8

In 1901-02, the Mughalpura Workshops started assembling engines from the parts supplied from manufacturers of U.K. This engine, which was used for shunting purpose on NWR was one of the first assembled at Mughalpura workshops with component supplied from North British Locomotive Works, Glasgow in 1904. This 55 ton broad-gauge (5'6) locomotive has side tank with 0-6-2 wheel arrangement. Equipped with 'Stephenson's' valve gear, it contained two 17”x24n inside cylinders.

This 22 ton 04-0 wheel arrangement Broad-gauge engine was originally named "Phoenix" and built as a rail motor car. It was imported from Nasmyth Wilson & Patricroft, Manchester, U.K. in 1907. The passenger compartment was resting on engine and one axle. It was in use as a rail motor air unit for branch line service of East Indian Railway. Later in 1927, the coach portion was removed and the engine was converted as a shunting engine. A sister engine "Hercules" is preserved at Jamalpur. With inside plate frame it has two 9"x 14" inside cylinders, two vertical combination -type injectors and 'Salter balance' type safety valve fitted (In dome. Its maker number was 798 and Indian Railway number 1354.

This 90 ton 4-4-0 (later modified to 4-4-2) wheel arrangement broad-gauge ( 5'6") locomotive was built at North British Locomotive Co., Atlas Works, Glasgow in 1907 and used for passenger, mail and express trains on the Great Indian Peninsula Railway and later on North Western Railway. This engine had the privilege of hauling many VIP trains and accordingly changed names from 'Lord Clyde' to "Roosevelt' to 'Queen Express'. It was converted to a super-heated locomotive in 1922 and was rebuilt in 1941 at Mughalpura Workshops when its class was changed from E-1 to EM. Its maker number was 17780 and Railway Number was EM-922.

This 2-8-4 wheel arrangement broad-gauge (5'6") steam engine was originally acquired by GIP Railway from North British Locomotive Co., United Kingdom for operation as a banker engine on the Igatpuri Pune ghat section in 1907. it was one of the pre electrification engines on the arduous Bhor Ghat section on the erstwhile GIP railway. After the hill line was electrified in 1929, the steam bankers were sold, one of these, of class Y-2 (later L-2) went to the public sector giant HINDALCO in Renukoot, where it spent the rest of her service life. This L-2 heavyweight was donated to NRM by HINI)ALCO, and entered the museum on 13th December 1997 under her own steam after rendering faithful service of 88 years to the nation.