PRS stands for Passenger Reservation System. Which means mostly all of the railway stations will have this PRS Counters to book tickets through offline. RAC passengers can travel in the train.

No, according to rules WL passengers can't travel in Resevered Class (1A, 2A, 3A & SL). If you have Confirm+RAC, Confirm+Waiting, RAC, RAC+Waiting list ticket, passengers can travel in the train for which class tickets have been booked.

If Waiting Ticket List is not confirmed, the passenger should travel only in Unreserved (General) Coach or he has to cancel the ticket.

For cancellation of Confirmed Tickets more than 48 hours advance of the scheduled departure of the train. 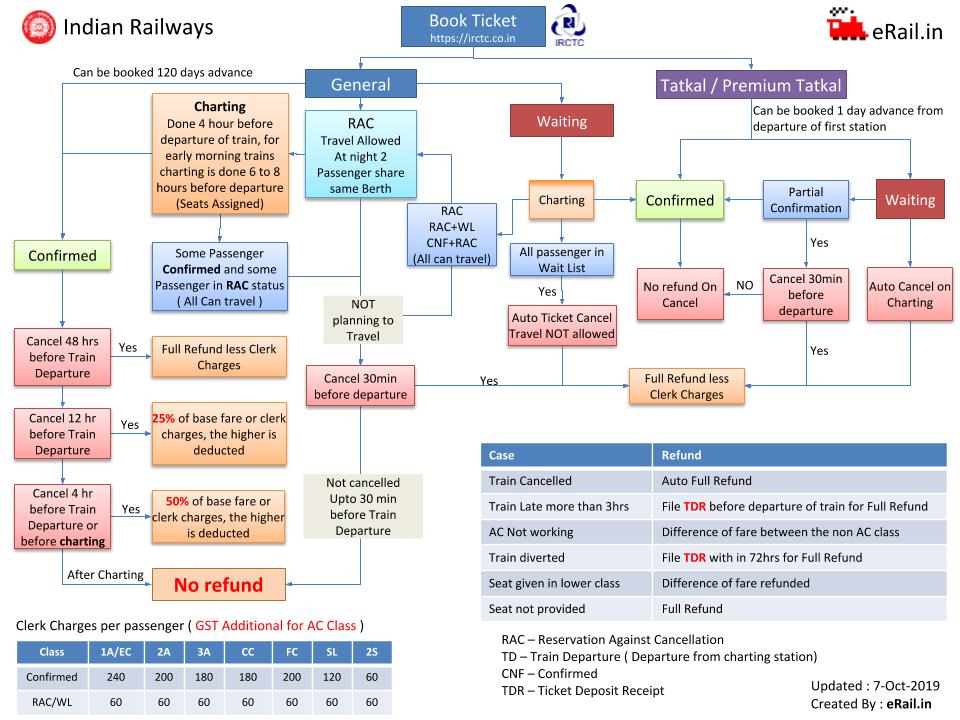 If you were forced to travel in a lower class for want of accommoda-tion, you can get a refund of difference of fare between fare paid and fare for the class actually travelled. This refund should be claimed within 2 days of the date of issue of the certificate (excluding the date of issue) of the arrival of the train at your destination. To claim this refund, you will need to submit your ticket along with the certificate issued by the Travelling Ticket Examiner.

If you were not provided accommodation due to unforeseen circum-stances, you are entitled to full refund of the fare paid by you with-out any deductions. To claim this refund, you should surrender your ticket at the journey originating station within three hours after the actual departure of the train.

If your train is running late by more than three hours, you can get a refund of full fare paid by you without any deductions. You can claim this refund at the journey commencing station upto the actual departure of the train.

After deducting fare for the travelled portion, you will be refunded the balance fare.

To claim this refund, you are required to surrender your ticket at the station, within three hours of the actual arrival of the train which has been delayed.

If your train is cancelled due to accidents, breaches or floods, you will be refunded the full fare paid by you. To claim this refund, you should surrender your ticket within three days of the scheduled de-parture of the train.

In combined tickets, where few passengers are Waitlisted and others are Confirmed, you will be given full refund less clerkage charge in respect of all passengers. If such tickets are cancelled upto half an hour before the scheduled departure of the train

No, you cannot get any refund on a lost ticket. However, you will be allowed to travel on the reservation already made, after paying the prescribed charges for the issue of a duplicate ticket. In your own interest, you are requested to inform the Reservation Office immediately about the loss of your ticket. This will also help prevent fraudulent refund claims.

If the loss of your Confirmed/RAC ticket is reported before the preparation of the Reservation Chart, a duplicate ticket will be issued on collection of Rs. 50 per passenger for second & sleeper class and Rs. 100 per passenger for other classes.