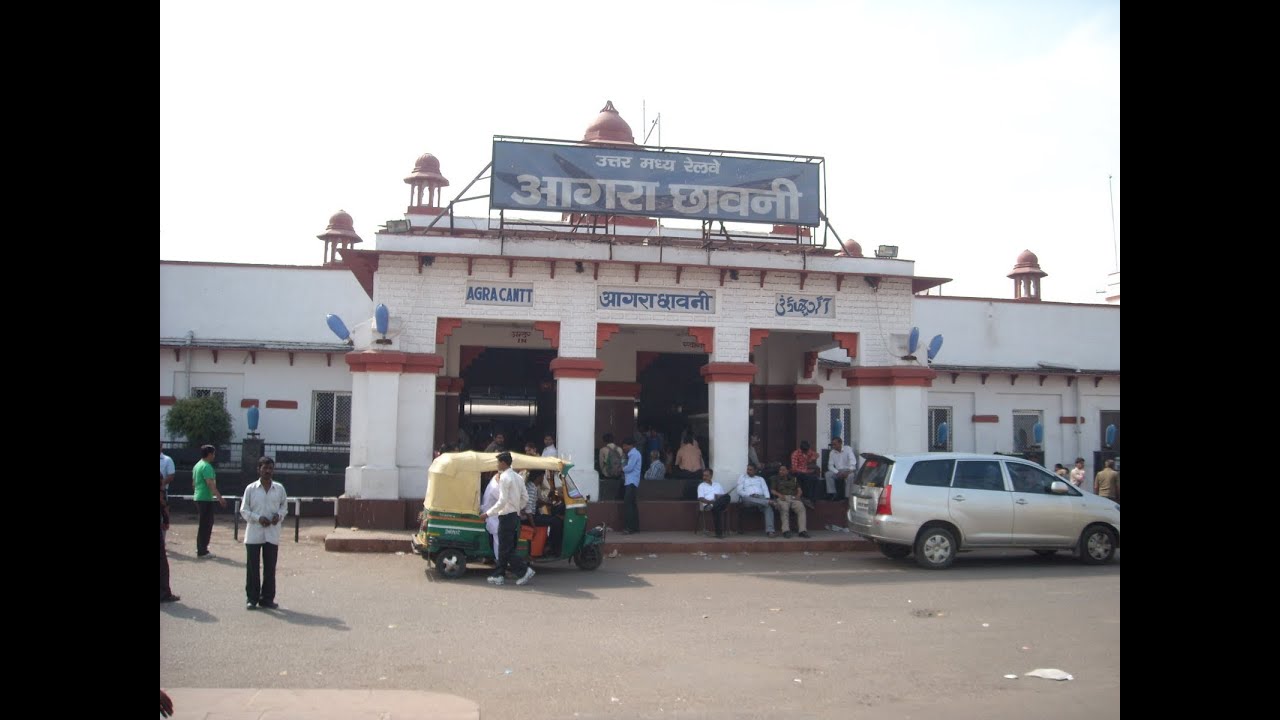 Agra Cantt railway station to Agra Fort by road distance is 4.6 kms. The fort and the Taj, 2km apart, both overlook the river on different parts of the bend. If you want to visit agra fort, first of all You can easily get taxi, tempo, auto-rickshaw and cycle rickshaw in the city that will take you to your destination. Prepaid taxis are also available.

If you want to visit the various places near the agra city. There are various places to visit near agra city like as; Sikandra Fort, Tomb of I'timād-ud-Daulah, Akbar's tomb, Jama Mosque, Fatehpur Sikri etc. So you You can easily get taxi, tempo, auto-rickshaw and cycle rickshaw in the city that will take you to your destination. Prepaid taxis are also available.

The best time to visit Agra is in the winter months between November and March when the weather is ideal to go sightseeing.

The Taj Mahal is closed every Friday to anyone not attending prayers at the mosque.

Entry fee of Taj Mahal for Citizens of SAARC and BIMSTEC Countries is Rs. 530/-

You can enter at Taj through the west, south and east gates. Tour groups are enter through the east and west gates. Independent travellers are enter through the south gate, which is nearest to Taj Ganj, the main area for budget accommodation, and generally has shorter queues than the west gate. The east gate has the shortest queues of the lot, but this is because the ticket office is inconveniently located a 1km walk away at Shilpgram, a dire, government-run tourist centre. There are separate queues for men and women at all three gates. Once you get your ticket, you can skip ahead of the lines of Indians waiting to get in – one perk of your pricey entry fee.

Cameras and videos (Rs. 25) are permitted but you can't take photographs inside the Taj itself, and the areas in which you can take videos are quite limited. Tripods are banned. Bags much bigger than a money pouch are not allowed inside; free bag storage is available at the west gate. Any food or tobacco will be confiscated when you go through security.

If you keep your ticket you get small entry-fee discounts when visiting Agra Fort, Fatehpur Sikri, Akbar's Tomb or the Itimad-ud-Daulah on the same day.

Agra to Delhi by train : Agra is on the main train line on the Delhi-Mumbai and Delhi-Chennai routes. There are close to 20 trains to Delhi every day, and at least three or four to both Mumbai and Chennai. There are various stations in Agra city; Agra Cantt, Agra Fort station, Raja Ki Mandi, Agra City, Idgah Railway Station.

Another bus stand in Agra city is ISBT at Transport Nagar, 12 km from the Taj, is an inter state bus terminal. Most intercity buses pass through the Taj, except for buses originating from Idgah Bus Stand going to Rajasthan.

Delhi to Agra by Bus : The road distance between delhi to agra is approximately 238.8 km via Yamuna Expressway. Most of the buses pass through various boarding terminals in the route, a few of the many popular points are in Delhi; Sarai Kale Khan, Sarita Vihar Metro Station, Indira Gandhi International Airport, Shop No-3 & 4A, Gurukul shantidham ashram and Anand vihar metro pilar-214.

Agra to Delhi by Bus : The road distance between agra to delhi is approximately 238.8 km via Yamuna Expressway. Most of the buses pass through various boarding terminals in the route, a few of the many popular points are in Agra; Idgah bus stand and ISBT bus stand.

Prepaid Taxi and autorickshaws are available to anywhere from both sides of Agra Cantt Railway Station.

Delhi Airport to Agra by Taxi : If you plan to travel to Agra by taxi from Delhi International Airport (DEL), make sure you hire a taxi that can take you to other cities (the white ones). The prepaid taxi kiosk for local taxi services are known to arrange (privately outside the auspices of the prepaid taxi system) a local taxi (green and yellow ones) to take you to Agra.